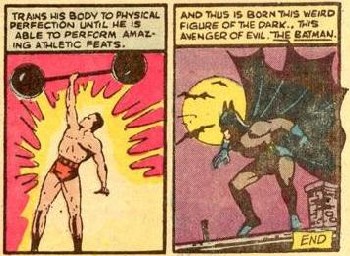 "Let me tell you something, lady... there's no such thing as 'just human'."
— Math, Grrl Power
Advertisement:

In the land of fiction, training can literally give you superhuman powers! Intense exercise can let you split boulders, jump three stories straight up, "see" while wearing a blindfold, and make your skin bulletproof... somehow.

A lot of characters have out-and-out superhuman abilities, and the explanation for such powers is just "They trained really hard for several years, or trained under bizarre and unusual circumstances. Train, and you, too, can bash mountains open with your head." Western comic book superheroes, often stated to "lack superpowers", nevertheless are clearly able to hold their own and defeat villains with superhuman strength many times their own simply by knowing how to perform martial arts. "Non-superpowered" characters such as Batman could beat almost anyone in a fight, dodge bullets, and withstand ridiculous amounts of damage because they spent a few years living and training atop a mountain.

Although most of the western versions of this trope don't have explicitly supernatural abilities, they can do things that would be impossible for normal humans. Asian and Asian-based fiction is somewhat different, as such examples are generally grounded in Eastern mysticism, involving the development and focusing of chi (a.k.a. qi or ki). The superpower here is thus of a more traditional sort than in Western examples, though the training is still the significant factor; Average Joe can't harness his chi half as well as Krillin. You might as well go ahead and apply your own mental Justifying Edit to all such examples below, as this "explains" everything from Mortal Kombat to Final Fantasy.

Or, to put it a different way, there are essentially two different variations on this trope. The first, "Don't-Call-Them-Superpowers", is the western version and has the character performing feats that are not strictly realistic, but at least seem plausible enough. Made of Iron, Improbable Aiming Skills, Plot-Powered Stamina, and extreme cases of Le Parkour are some frequent results of this, and many a character manifesting this form of Charles Atlas Superpower will be a Badass Normal (though note not all Badass Normal characters display this trope, the training and dedication is a key component). The second, "Skill-Trumps-Physics", has the character performing feats that are out-and-out impossible in real life, with an explanation not attributed to any Applied Phlebotinum but instead because "they are just that damn good". This system meshes well with the idea of chi, though it doesn't require it, and arguably the full-on magic powers often seen in Ki Manipulation constitute a third form of the trope anyway. The line between the variations can be messy and subjective, but as a brief example: a climber who can consistently scale a rock wall faster than the world-record holders would be the first, a climber who can scale a sandstorm would be the latter, and someone who can climb a slick glass skyscraper would be somewhere in between.

The standard line here is that "the average person only uses ten to fifteen percent of their potential strength". It's possible for the brain to use far more muscle power than the person would normally consider their limit, but usually only by shutting down most other major body processes — digestion, the immune system, etc. — and flooding the body with adrenaline. Otherwise known as the "fight or flight" response. In other words, it's a Dangerous Forbidden Technique only ever used for Big Damn Heroes moments. It's common for a Proto-Superhero to derive his or her extraordinary talents this way, as such characters pre-date most stock Super Hero Origin stories.

As a narrative device, this trope emphasizes that the character is extremely dedicated to their work. For instance, Batman's abilities fit nicely with his obsessive mindset: He couldn't have acquired this much skill if he wasn't truly dedicated. It can also make your character seem a little more realistic, since intensive training really can give you cool abilities in Real Life, just not to the extent that you often see in comics.

The Trope Namer is an early 20th-century bodybuilder

who advertised a program which swore it could turn any 97-lb. weakling into a hulking, muscular giant who could punch out a bully that kicked sand in his face. This sort of idea was around long before and after Charles Atlas, however, as the ever-brilliant David S. Zondy explains

See also Made of Iron and Weak, but Skilled. The same idea applied to the mind would be 90% of Your Brain . Contrast Hard Work Hardly Works. God forbid that you give the character actual superpowers and make them an Empowered Badass Normal. May result because they Sacrificed Basic Skill for Awesome Training. Use of actual Ki Manipulation (e.g., Pure Energy blasts) blur the line between this and outright magic. May run in families.

The inverse to this trope is Boxing Lessons for Superman, where an already-superpowered character trains in a mundane skill. Compare Artistic License – Biology, Mistaken for Superpowered, The Power of Acting, and Supernatural Martial Arts. Contrast Enlightenment Superpowers. When repetitive training grants a character powerful skills without their knowledge, that's Wax On, Wax Off. If it turns out the "mundane"-level power actually was a gift, that's Real-Life Super Powers. If the character lost their powers but remains a legitimate threat, they are Brought Down to Badass.