Expect unmarked spoilers on these pages for the Super Rookies era.note In practical terms, this translates to the manga's first 597 chapters and the anime's first 516 episodes. Also, New World spoilers are unmarked in character descriptions, and examples relating to the New World era can be spoiler-tagged if deemed necessary. 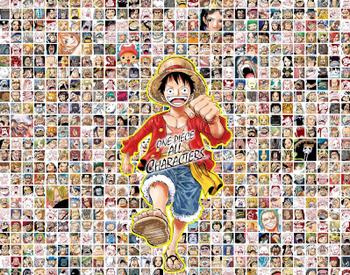 ...and many other characters have been introduced since.
Advertisement:

The world of One Piece is large, captivating, and wonderfully diverse and the characters are just as much so. Look no further than here to learn more about them, which are sorted according to their main allegiance within the manga, anime, light novels, video games, and films.

Spoilers below: Some characters' statuses, mostly the Marines and the Warlords, are updated as they are revealed or changed. As a result, they are not spoiler-tagged, leading to potential major spoilers. Also, some characters' very existences are major spoilers in and of themselves, so be extra careful. Please see the Spoilers Policy for further information.