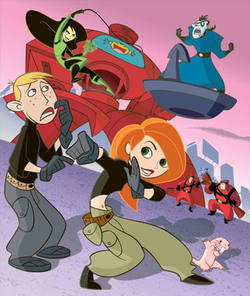 Kim Possible. She can do anything.
"It is impossible!"
"No—but real close."
Advertisement:

Kim Possible is a Disney animated series that aired from 2002 to 2007. It features a redheaded Action Girl, her blond male sidekick, and a Voice with an Internet Connection — They Fight Crime!, mostly a sleek and sexy woman with long black hair who turned to crime For the Evulz because she was bored being a hero... oops, wrong show.

The premise is, at first glance, an interesting cross of Alias and Buffy the Vampire Slayer (with a little bit of Austin Powers) - high school head cheerleader plus awkward male friend and naked mole rat stop global supervillains. The series has a post-modern take on many aspects of both Action Series and High School dramedy.

A big hit for veteran creators and executive producers Bob Schooley and Mark McCorkle, for whom this is their first (and only) original creation for Disney. They had previously worked on Buzz Lightyear of Star Command and several other series, and in their early careers wrote for The Real Ghostbusters. They also penned the Disney live-action movie Sky High (2005).

The series was produced by Chris Bailey (Season 1) and Steve Loter (Season 2 on), with character designs by Steven Silver. All these talented folks previously worked on the short-lived Clerks: The Animated Series. Loter was previously in charge of The Legend of Tarzan, and has worked on American Dragon: Jake Long. Silver has designed characters for a broad cross-section of popular modern series, and is counted as a major art influence on the predominant webcomic Penny Arcade.

The show was originally taken out of production after 65 episodes, for reasons which are subject to debate (although it's been generally accepted that Disney policy discourages shows from going past 65). Capped off by the truncated Disney Channel Original Movie So the Drama, in which Kim and Ron move beyond Just Friends and into an Official Couple, it was uncanceled for an additional 22 episodes following a massive campaign to continue production by the show's fans - that, or a German syndication deal requiring more episodes. It re-premiered in February of 2007. In the process it became only the second Disney Channel series to get a fourth season, behind the live-action sitcom That's So Raven.

The series ended again with a second Grand Finale in September of the same year with the conclusion of Season 4, and with all the producers packing up and moving over to Nickelodeon to create The Penguins of Madagascar.

In February 2018, it was announced that a live-action television film based on the series was in production, with Schooley and McCorkle returning to write and serve as executive producers. The film premiered the following year, on February 15, 2019.

Be sure to check out its Character Sheet, and the recap page could use a little help.

Statler: Well, Kim always does the impossible...
Waldorf: Ron always seems unstoppable...
Statler: So what are we?
Waldorf: Those Two Guys who bear the unbearable!
Both: Doh-ho-ho-ho-ho-ho!
Feedback