Western Animation / The King and I 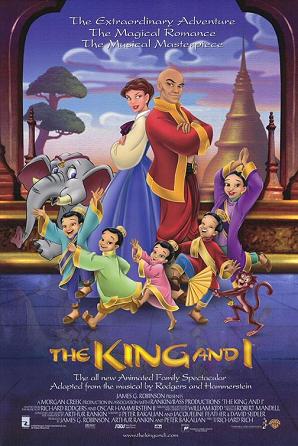 A very loose Animated Adaptation of Rodgers and Hammerstein's musical released in 1999 by Warner Bros. Family Entertainment and animated by Pentamedia Graphics and Rich Animation Studios, in association with none other than Rankin/Bass Productions. The looseness of the adaptation includes such additions as a magical illusion-creating gong, dragons, an Ethnic Scrappy, evil statues, and a monkey. The result was unrecognizable enough that the estates of Richard Rodgers and Oscar Hammerstein have refused to allow any of their other musicals to be made into animated films.

The King and I contains examples of: