Western Animation / The King and the Mockingbird 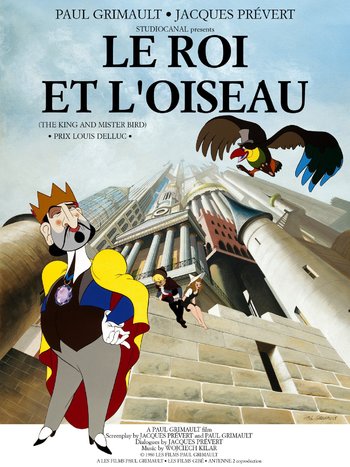 A classic French animated film (French title: Le Roi et l'oiseau, literally The King and the Bird) directed by Paul Grimault, with one of the longest development times in animation history; even longer than The Thief and the Cobbler.note Although the total amount of years is less when you consider that the film was made in two parts: 1948–52 and 1977–79, a total of 6 or so years. The production delay was caused by money and copyright issues, with director Grimault spending 15 years getting the rights of the film back, then another 10 getting funding to finish it.

King Charles V+III=VIII+VIII=XVI, ruler of Tachycardia, is a vain, spiteful bully whose life's passion is hunting - not that he's particularly good at it, owing to being cross-eyed. His greatest foe is the titular Mockingbird, who seeks revenge on the king for killing his wife while hunting, and mocks him at every turn. When the king falls in love with a portrait of a beautiful shepherdess, the mockingbird seizes on the chance to overthrow the cruel monarch once and for all.

The film is dedicated to its scriptwriter Jacques Prévert, who died in 1977 before it was fully finished. It is considered a major inspiration by Hayao Miyazaki.

The 1952 release, retitled The Curious Adventures of Mr. Wonderbird and featuring the voice of Peter Ustinov, has entered the public domain and can be viewed on the Web Archive

. The Criterion Channel offers the completed 1980 version in the original French with subtitles.