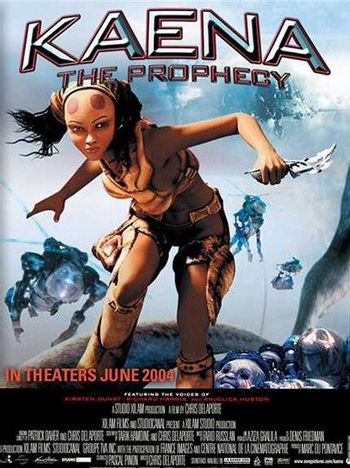 Kaena: The Prophecy (also known as Kaena: La prophétie) is a computer animated film created in French-Canadian coproduction. It opens with a giant spaceship of the alien race crashing upon the unknown planet. Six hundred years later, Kaena, the titular young orphaned woman, lives with a small tribe on a humongous plant called Axis, grown from the remains of said spaceship. While all her kin works hard to collect sap, which is demanded by their gods, she explores the world around and brings back stories that clash with the common beliefs. Nobody but the kids believe her, to the point of being called a heretic. Guided by a recurring dream of a blue sun, she wanders even further from the village, where she is attacked by a monster - and rescued by an alien who reveals to her the truth about her world, the gods and the blue sun she sees in her dreams.

The movie gives examples of these tropes: