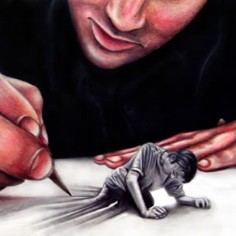 A common power for many one-shot villains and examples of Monster of the Week, Art Initiates Life is where a character can quite literally change their artworks into real versions of whatever they depict. Usually using some rare MacGuffin or Advanced Phlebotinum, this most often happens with a character bringing their paintings or drawings from canvas to reality, possibly using some form of a magic pencil, but can also cover various other forms of art, such as sculptors bringing various statues to life.

This is also not always a wanted side effect of these drawings, as in some series there have been instances where a character with this ability was not aware that there was actually an effect. A villainous character whose method is this may well be a Mad Artist or in games, a Mook Maker for a level or area.

He can turn his drawings into real, moving objects.

He can turn his drawings into real, moving objects.