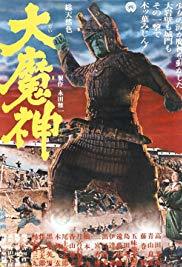 Behind a Mask of Stone, the Fires of Vengeance Burn!
Advertisement:

The daimyo of a peaceful village is slain in a coup d'etat, with his children being forced to flee. Years later, the usurper has proven to be a brutal and cruel ruler, prompting the people to rally around the returning children for salvation. However, with the daimyo's forces being far better armed than the people, they must awaken the statue of vengeful god Daimajin to save the day. However, Daimajin's wrath is not easily sated...

The film received two sequels the same year, Return of Daimajin and Wrath of Daimajin, a television remake, Daimajin Kanon, and is set to make an appearance in Takashi Miike's 2021 film The Great Yokai War: Guardians. It has received a Blu-ray release via Mill Creek Entertainment and Arrow Video.