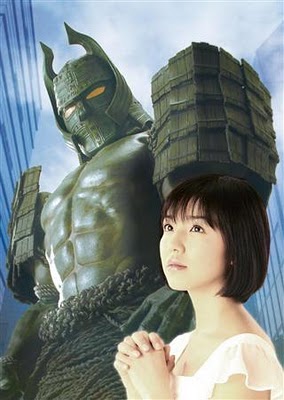 "This is the story of a girl who lost her way in the city, and then used her singing voice to summon a miracle. It is a fable for the 21st century."
Advertisement:

Daimajin Kanon is a 2010 Tokusatsu production and remake of the original Daimajin film set in modern times.

Kanon Mikazaki is a young student who moves to Tokyo with the dream of becoming a singer, but is left heartbroken after her ambitious boyfriend betrays her by stealing a treasured family song and using it to propel himself to instant stardom. Falling into a deep depression, Kanon is suddenly approached by a spirit who reveals an unbelievable fate: that Kanon and her family song are the key to summoning an ancient guardian known as Daimajin, whose presence is desperately needed to fight against a coming onslaught of demons. The problem is that the song is one of love and happiness, and the magic is only effective if Kanon sings with all of her heart.

And so Kanon, along with the aid of some eclectic guardian spirits, begins a slow journey to pull herself out of her depression and rediscover both her dream of becoming a singer and her faith in humanity. But time is running out, as the demonic hordes have begun to possess people to lay the groundwork for their main invasion, and only Daimajin has the power to save the world.