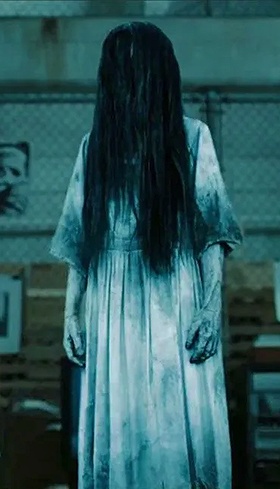 The split ends are the scariest part.
Pat: Why is every Asian ghost exactly the same ghost... person?
Matt: Well, the girl in The Ring is different.
Pat: No, I mean, they're literally all ladies in white clothes with super-long black hair that's all tangled and stuff.
Matt: What's scarier than a lady coming at you?
— Two Best Friends Play
Advertisement:

An entity often seen in Japanese horror movies is a ghost, usually that of a young woman, with long, stringy black hair that covers her face, clad in a white burial kimono or shroud. Her face itself is often quite ghastly to look upon. She is commonly barefoot, if she has feet at all. In some cases, this type of ghost will appear with a pair of ghostly blue flames hovering around her.

This is actually a type of ghost known as an onryō, the ghost of a young woman who was greatly wronged by a man in life and now seeks vengeance on the living. Usually, the man who actually did the wronging is left untouched by the onryō (unless he's a main character) and her anger tends to be directed more at anyone unlucky enough to run into her. While the onryō goes as far back as 729 A.D., the Trope Codifier was undoubtedly Sadako Yamamura from The Ring given how iconic she is to Japanese horror and the horror genre in general, to the point it's hard to find examples that do not reference her to some extent.

While there are a few male onryō in kabuki, the vast majority are female. And while there are similarly a small number of exceptions with lighter and/or more colorful hair, and even a few with skin that isn't ghost-white, the overwhelming majority are Eerie Pale-Skinned Brunettes.

In most media, the onryo has no one in particular to seek vengeance on, rather inflicting it on everyone in the area.

This trope, while a staple in Asian media for a long time, also became insanely popular in Western media during The Noughties and early in The New '10s. Compare with Bedsheet Ghost, Undeathly Pallor, and Yuki-onna. Contrast with Cute Ghost Girl note  Though there can certainly be overlap. Usually comes with a side serving of Screamer Trailer. See also Undead Child and Vengeful Ghost.

The BigBad of the movie. While not an authentic ghost, She counts more as a EldritchAbomination of some sort. She still manages to look like a classic onryo with stringy black hair.

The BigBad of the movie. While not an authentic ghost, She counts more as a EldritchAbomination of some sort. She still manages to look like a classic onryo with stringy black hair.