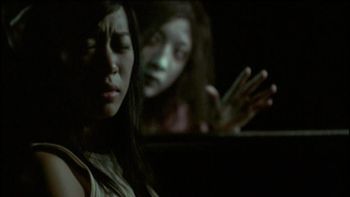 Shutter is a 2004 Thai horror film by Banjong Pisanthanakun and Parkpoom Wongpoom. It focuses a on young couple, Tun and Jane, who, after being involved in a hit-and-run accident, find themselves menaced by the ghost of a young woman named Natre, most prominently in mysterious and ghostly images seen in photographer Tun's developed pictures. As Tun's circle of friends start to kill themselves one by one, it soon becomes clear that there is a lot more to these images and hauntings than meets the eye - and Tun himself is hiding many dark secrets...

The film was remade in 2007 as a Tamil film called Sivi, and as a 2008 American film, also titled Shutter.