Western Animation / Happily Ever After: Fairy Tales for Every Child 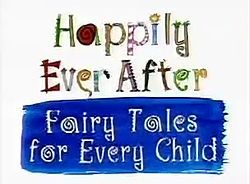 An animated series that originally aired on HBO and ran for three seasons over 1995-2000. The episodes take different traditional fairy tales and set them in a variety of cultures from all around the world, with an appropriate Race Lift applied to the characters. In Season Three, all the stories have female lead characters, which depending on the source material may or may not be the result of a Gender Flip. Each episode is narrated by Robert Guillaume, with a recurring cast of guest stars including Sinbad, Rosie Perez, and B.D. Wong. And yes, every story ends with the characters living Happily Ever After.

Not to be confused with the Filmation movie Happily Ever After.

Compare and contrast Faerie Tale Theatre, another cable series that retold fairy tales with an All-Star Cast. (Twenty-four stories were dramatized by both shows.)