I'm Thinking It Over! 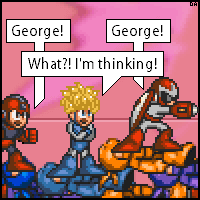 A character displays uncertainty in a situation that you wouldn't expect to call for it. Usually, this takes the form of giving too much consideration to a "choice" that isn't really supposed to be one.

Sometimes, the choice the character is put before offers something they want or need, but accepting it would mean breaking some sort of a personal rule (like agreeing with the stupid member of the party). Or the character is just tired of being Surrounded by Idiots and the option of being killed sounds oddly inviting.

See also You Can Keep Her!.

This situation is always spawned by Skewed Priorities, and often implies or results in the character being Too Dumb to Live. But more often than not it is a Funny Moment. Would Rather Suffer is the related trope where the character actually does choose the "wrong" option, or at least says they would if given the chance. Often combined with Death by Materialism.

It perhaps doesn't help that at least one of B5's command staff actually did plan to have Bester killed previously before being convinced it was a bad move.