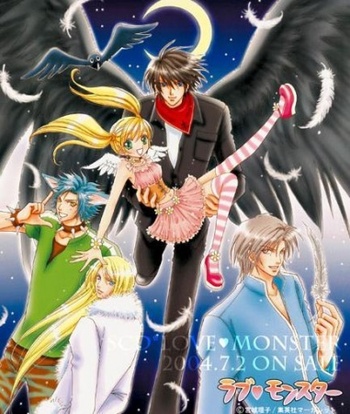 Love Monster is a shōjo manga by Riko Miyagi which was serialized in Japan by the publishing company Shueisha in the Margaret from 2002 to 2006 and collected in 12 Tankōbon volumes.

Hiyo Osora failed the entrance exam to the high school she chose, but somehow she receives a strange acceptance letter to SM Academy (Saint Monster Academy) — which she hadn't even applied to. Thinking that her father, an alumnus of the school, must have sent in a reference letter for her, she decides to go to the school. When she first arrives there, while being distracted by the flowers and green nature around her, two hooded people (Yuki and Jiro) snatch her and bring her to the school president, Kurou Tenma. Fortunately, all that was simply a type of hazing for all new members of the school.

She is surprised to find the school crawling with people who are actually monsters in disguise! The next big shock is being told by Kurou himself that she is his fiancée! She is so shocked she faints. She then wakes up and finds out that Kurou has gone as far as having her room connected to his. The only way she can get out is in his arms with his wings or as we discover later on, a trap door down an enormous amount of stairs (since his room is located in a tower).