Western Animation / Happily Ever After 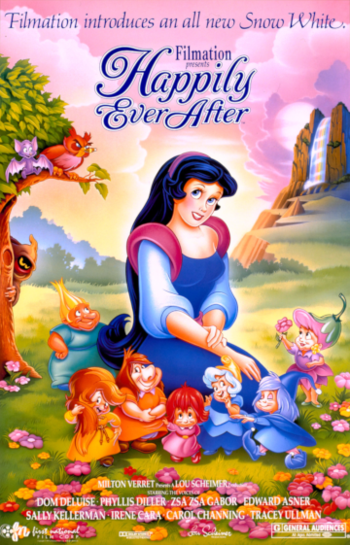 Looks like Snow White got a tan and hair extension.
Happily Ever After is an unofficial sequel to Disney's Snow White and the Seven Dwarfs, produced in 1988 and released in 1993 by Filmation. As the studio had actually gone under in 1989, the film is also Filmation's final project. As with most Filmation productions, it features low budget animation and a typical high fantasy/adventure setting, though to divert from the Disney setting, it takes some serious plot detours.
Advertisement:

The film opens literally as the previous story ends with Snow White and The Prince are off to go get married after the death of the wicked Queen. Unfortunately, just as this is taking place, the Wicked Queen's brother and evil enchanter Lord Maliss pays a visit at his sister's home and gets caught up on the state of events. Naturally, he vows revenge on his step niece, Snow White. He kidnaps the Prince but loses Snow White. She ends up back at the house of the seven Dwarfs, who are actually absent as instead their cousins, the seven elementally powered Dwarfelles have moved in. This leads to one big girl posse chasing down Maliss to rescue The Prince. Along the way, they are followed by a hooded individual called The Shadow Man.

As you might be able to tell from the plot summary, the film takes more than a few liberties with the fairy tale's setting.

It was critically panned upon its release due to its rather cliche story and the low animation quality. Despite bombing hard at the box office, the film did manage to develop a cult following on VHS.