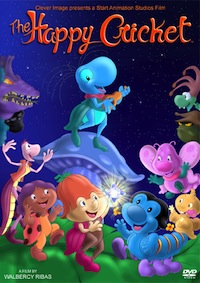 After twenty years of development and thirty months in production, the film known as The Happy Cricket finally saw the light of day in 2001.
Advertisement:

Christopher is a happy cricket who spends his days playing his magic stringless guitar for his friends. But, his peace is interrupted when a purple lizard named Wartlord bans music. Making matters worse, Linda the Night Star falls from the sky. Making matters worse, Wartlord, having mistaken the star for a diamond, is also searching for her. Thus, it's up to Christopher and his friends to rescue the night star, and stop Wartlord. Also, there's a Green Aesop tacked on just to be educational.

The Happy Cricket contains examples of: