You Must Be Cold 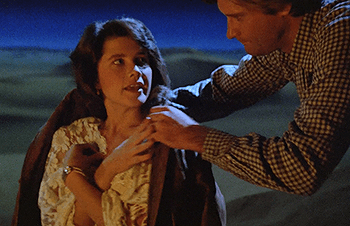 "And you'll offer her your letter jacket after you notice this funny way she shakes when she gets cold. And she'll feel like the luckiest girl in the world."
— Annie prepping Troy for his first date, Community, "Home Economics"
Advertisement:

A woman is cold. For some story-related reason, she and her male partner are stuck outside somewhere and not really dressed for the weather, and now she's huddled over and shivering. A man takes off his coat and gently drapes it across her shoulders. She goes around in the coat for the rest of the scene.

The basis for this trope is the idea that men are duty-bound to take care of women. The Knight in Shining Armor will always do this and a jerkass can reveal they might be a Jerk with a Heart of Gold.

Very much Truth in Television. Not only are men generally more tolerant of cold than women, but men's formal clothing is usually warmer and in more pieces, especially if all she's wearing is a slinky evening gown. Men are also generally broader in the shoulders, so even if he's short, it's still likely to fit her. Because of this, it's usually Always Male to Always Female but it can go other ways if the story calls for it.

Because of the romantic nature of the trope, it is often used for Ship Tease but this is not required. The coat receiver could be a child, child-like, sick, or otherwise vulnerable because the core is about taking care of the other person.

Not to be confused with Exposed to the Elements, which might cause this trope.

Not affiliated at all with Nipple and Dimed.