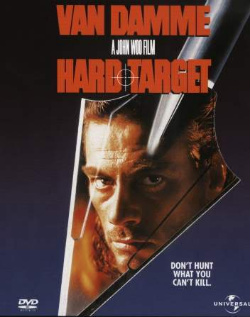 Douvee: So, tell me. This man who chase after you, he mad at you for business or pleasure?
Chance: Both.
Douvee:...Uh huh.
Advertisement:

The first film that John Woo made in Hollywood after leaving Hong Kong, Hard Target (1993) starts off with a homeless man fleeing attackers on motorcycles, before being shot down just before he escapes across a river. Cut to three weeks later, when Natasha Binder (played by Yancy Butler) is looking for her father deep in the heart of New Orleans. Jean-Claude Van Damme... sorry, "Chance" Boudreaux, saves her from a gang. Natasha, after being told that the police won't be able to find her father, hires Chance to protect her as she investigates. Soon, the pair find out about a secret "hunting" ring, led by Big Bad Emil Fouchon (Lance Henriksen) and Professional Killer Pik Van Cleaf (Arnold Vosloo) and must turn the tables on the hunters.

The movie is chock-full of John Woo's signature style, especially in the action scenes. Slo-mo, motorcycles exploding, and pigeons abound as Van Damme kicks and shoots dozens of mooks. All while sporting a mullet. And being aided by Wilford Brimley. Needless to say, there are some who consider it So Bad, It's Good, completely awful, genuinely awesome, or somewhere in between all three. 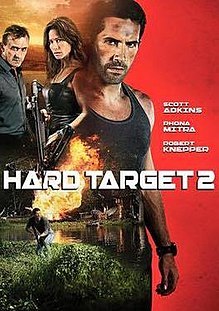 It received a Direct to Video sequel in 2016 starring Scott Adkins. In the sequel, its revealed that the manhunt operations, despite being seemingly eliminated after Emil Fouchon's death in the original film, is still occurring in countries outside of the States. Wes Baylor, a professional boxer who accidentally committed murder, ends up fleeing to Thailand where he is the subject of yet another deadly game of manhunt.