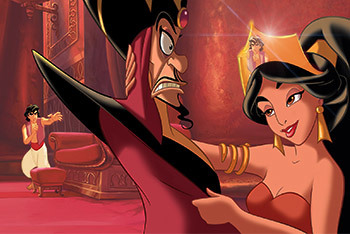 Should've just gone for the lamp instead of just sitting there, slack-jawed, buggy-eyed.
Advertisement:

This is when someone is alerted to danger behind their back by a conveniently-placed (or ill-placed, depending on whose side you're on) reflective surface, whether an actual mirror, window, body of water or anything else that might have a reflection on it. This allows the mark to realize something's going on.

From there they have several options. Depending on whether the tail realizes they've been made, the mark might just act as normal to lull the tail into a false sense of security. Or they might try to confront them or make an escape. A common scenario is when one party is being tailed by another and given away like this.

Expect to find this in espionage and detective stories. Compare Mirror Scare. Not to be confused with The Mirror Shows Your True Self or Watching the Reflection Undress.

Marty in the Rearview Mirror

Marty in the Rearview Mirror