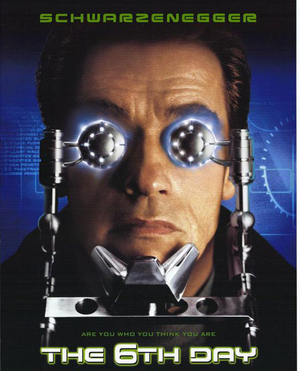 Smile for the camera, Mr. Gibson!
"God created man in His own image. And behold it was very good. And the evening and the morning were the sixth day."
— Genesis 1:27, 31.
Advertisement:

Directed by Roger Spottiswoode and starring Arnold Schwarzenegger, Tony Goldwyn, Robert Duvall, and Michael Rooker, this 2000 Sci-Fi movie takes place in a not-too-distant future where limited cloning technology has come into use for a number of things, from curing diseases to re-animating your pet to cloning fish as a food supply. However, cloning people is illegal. Arnie plays helicopter charter pilot Adam Gibson, a man who unintentionally gets involved with a human cloning cabal, who will kill him to protect their secrets.

The title comes from the top quote from the Book of Genesis, which ends up being plot-relevant. The official title is "The 6th Day," not "The Sixth Day," changed to prevent it from being confused with another film that came out the year before.