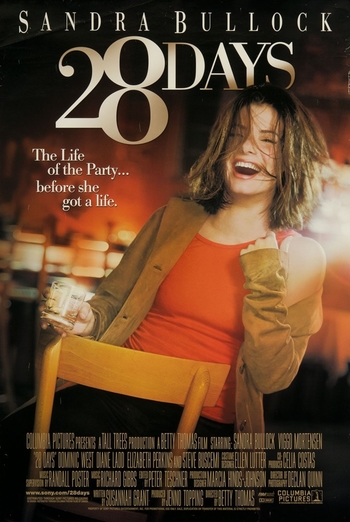 The Life of the Party... before she got a life.
"Yeah, I know I drink a lot, I know I do because I'm a writer and that's what I do, I drink. I'm not like those people out there, I can control myself! I can, if - that - if I wanted to, I could, if I wanted. I can! I can!"
— Gwen Cummings
Advertisement:

28 Days is a 2000 Dramedy film directed by Betty Thomas and starring Sandra Bullock.

Gwen Cummings (Bullock) is a newspaper columnist who drinks. A lot. But she doesn't have a problem. She and her boyfriend Jasper (Dominic West) just like to have a good time. One Saturday morning after a heavy night of drinking, Gwen and Jasper arrive 45 minutes late for Gwen's sister's wedding. Completely drunk and high, Gwen and Jasper dance a little too roughly, knocking over the wedding cake. Gwen insists she will fix it, sheds her icing-covered bridesmaid's dress, and hijacks the limousine in a search to replace the missing cake, only to wind up driving into a house.

Gwen is sentenced to 28 days of hard rehab. Thus our story begins.

Definitely not to be confused with 28 Days Later.

Tropes in this film.