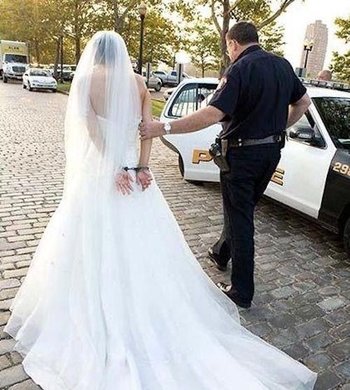 Not a great way to spend your honeymoon.
Bruno says, "It looks like rain" (why did he tell us?)
In doing so, he floods my brain
(Abuela, get the umbrellas)
Married in a hurricane
— Encanto, "We Don't Talk About Bruno"
Advertisement:

Weddings are usually a beautiful and happy event between two people (or sometimes several couples) who love each other and are ready to embark on a new life together. Everything virtually goes without a hitch, from the wardrobe to the music to the location to the food to the speeches, wedding days usually are the best day of someone's life.

Well, not in this case. Be it human error, deliberate sabotage or just plain circumstances beyond one's control, these events set forth to put a damper on a wedding. Perhaps the couple only has a shoestring budget for the day and has to resort to a very low-key (and often low effort) ceremony. Perhaps the best man, a family member, other guests or even the bride(s) or groom(s) got a little too drunk prior to the nuptials. Perhaps it's a wedding where no one likes one or both participants and is either there to support the other one getting married or they just want the food. Any situation, this wedding day is either going to be lousy or will at least have some good/bad moments or memories going for it.

This can be Played for Laughs or Played for Drama depending on the work. In order for an example to apply to this trope, it has to be either a series of bad or other unfortunate events that ruin the big day or one really big event that manages to shake things up. Simply mentioning something minor or forgettable that happened isn't enough.

Note that rarely the wedding ends up getting saved. For example, the couple finds a new location at the last minute and the couple gets a more intimate ceremony with close friends, or everyone is moved by the newlyweds' resolve that they managed to get through the difficult stuff, but other times the wedding gets ruined for good.

Tropes that may be involved in the outcome of this include Wedding Smashers, Speak Now or Forever Hold Your Peace, Bitter Wedding Speech, Widowed at the Wedding, Sham Wedding, Shotgun Wedding (if either or both parties are unhappy about the marriage/pregnancy), Bridezilla, Old Man Marrying a Child, Runaway Bride, Arranged Marriage (for ones that aren't meant to be) and Unwanted Spouse. The sitcom Wedding Episode notoriously never goes smoothly.

A subtrope of Worst. Whatever. Ever!, and a prime candidate for an Epic Fail. See also Crappy Holidays, Twisted Christmas (the Christmas-themed versions), Birthday Party Goes Wrong (the birthday version of this trope), Horrible Honeymoon (for when it occurs at the honeymoon), A Birthday, Not a Break (which is a more tragic version of ruined birthdays), and The "Fun" in "Funeral".

Bruno accidentally made it so that Pepa was so stressed about her own wedding, it resulted in a typhoon crashing it. While Pepa still resents him for it, Felix still remembers it as being a "joyous day anyway."

Bruno accidentally made it so that Pepa was so stressed about her own wedding, it resulted in a typhoon crashing it. While Pepa still resents him for it, Felix still remembers it as being a "joyous day anyway."