Western Animation / Tangled Ever After 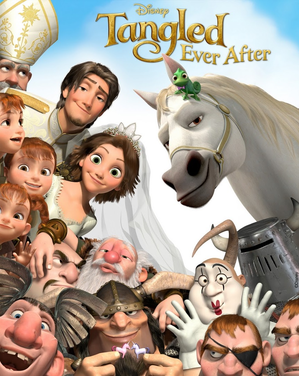 Rapunzel: It was a magical day, and everything went just as we planned.
Eugene: Well...almost.
Advertisement:

Tangled Ever After is a 2012 short film directed by Nathan Greno and Byron Howard. It is a sequel to Tangled. It premiered in theaters on January 13, 2012, before the 3D theatrical re-release of Beauty and the Beast and on Disney Channel followed by the premiere of The Princess and the Frog on March 23, 2012. The short was later included as a bonus feature on the Diamond Edition of Cinderella.

The story happens after Tangled, Tangled: The Series a.k.a. Rapunzel's Tangled Adventure, and Rapunzel and the Lost Lagoon, and as such is the concluding chapter of Rapunzel's story.

The Kingdom is in a festive mood, preparing for the royal wedding of Princess Rapunzel with Eugene Fitzherbert. However, chameleon Pascal and horse Maximus lose the gold bands, triggering a frenzied search to retrieve them.

Greno and Howard started the film after a popular demand. Among the film's voice actors are Mandy Moore, Zachary Levi, and Matt Nolan.