Film / The Original Kings of Comedy 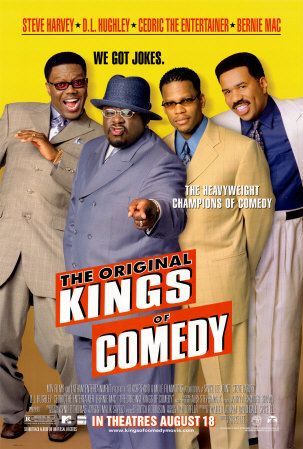 The Original Kings of Comedy is a 2000 film directed by Spike Lee that shows comedians Steve Harvey, D.L. Hughley, Cedric the Entertainer, and Bernie Mac performing in Charlotte, North Carolina.

Harvey hosts the show, entertaining the audience between his co-stars' routines, while the three others are all shown taking their turns at the mic. Topics of note that most/all of the comedians touch upon include include ethnic relations, the differences between blacks and whites, and family and married life, while other topics of note include Rae Carruth, the Titanic, impoverished life, African-Americans in sports, and kids. In between his costar's segments, Harvey plays old-school music while talking about the differences between Hip Hop and old school, berates an audience member who leaves during the show and forgets his coat, and talks about going to church while growing up.

Segments of the four performing are spliced with brief sections of video footage showing the comedians backstage, promoting the show on the radio, relaxing at the hotel, and just generally talking about themselves.