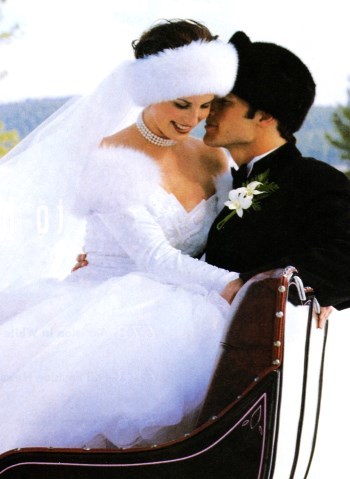 Since getting married is a powerful force in human life, and since a wedding is one of the most grandiose events many people put together in their lives, it shouldn't be surprising that it is also a powerful force in fiction as well. All its trappings are familiar to us: the bride in her flowing white dress, the groom in his black tuxedo or pastel suit, the ginormous white wedding cake, etc. Whether or not the lovebirds stick to these traditions or eschew them for their own vision can be the story in and of itself.

Traditionally (and still, throughout most of the world) marriage was always between man and woman, since its primary purpose was to create a stable family with children. However, as the contemporary Western world has adopted more individualistic attitudes and made marrying for romance its ideal, many people came to feel that this was unfair to homosexuals. Same-sex marriage is now legally recognized in many countries, and this has filtered through into pop culture. Thus, while the groom-bride combination is obviously still the most common, weddings in modern fiction may also have two grooms, two brides in white, or even a seemingly straight couple where the handsome groom or beautiful bride is really a crossdressing same-sex partner.

Even for hetero couples, many aspects of the wedding are Newer Than They Think. Most wedding traditions in the Western world, such as the big white dress and the big white figurine-topped wedding cake, are derived from Queen Victoria's wedding to Prince Albert in 1840. Before then, most people just wore their Sunday best to get married and threw a party afterwards, with the look and traditions varying by region and culture. Queen Vicky's white wedding was outlandishly grandiose for its time, meant to show off the Crown's wealth. White may represent purity in the abstract sense, but it also represented luxury in the practical sense. White fabric was nearly impossible to keep clean, meaning she bought a lavish gown just to wear it once, and white sugar was an expensive delicacy, meaning a multi-tiered white cake with all-white frosting was the height of opulence. The British aristocracy (as well as Victoria's children) copied these traits for their own weddings to display their own wealth, and as these materials became cheaper, the lower classes followed suit, to feel glamorous for a day if nothing else. Within a few decades, it became the new tradition.

So, anyone want to go to a wedding?