Film / Riding in Cars with Boys 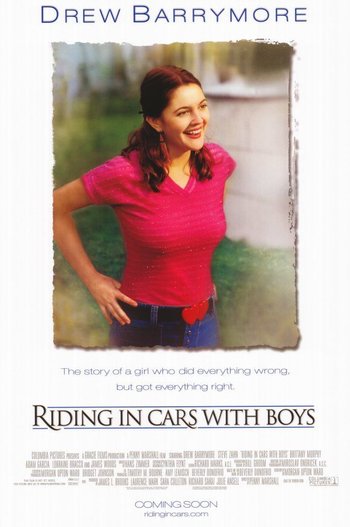 A 2001 drama film and the final one directed by Penny Marshall, based on Beverly Donofrio's bestselling memoir of the same name.

A single mother, with dreams of becoming a writer, has a son at the age of 15 in 1965. The story follows her through a failed marriage with the drug-addicted father, and the challenges of raising a son while trying to follow her dreams. The film stars Drew Barrymore as Beverly, the protagonist of the film. She is a rebellious daddy's girl, who meets and gets pregnant by a guy she's not really in love with. She marries him anyway (this is The '60s). Despite the troubled relationship, she tries to follow her dreams. She later leaves him to pursue them. Brittany Murphy plays her best friend, Fay, who also gets pregnant by her boyfriend, who is shipped off to Vietnam.