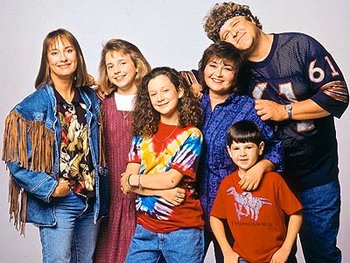 "I am so amazing. If I ever get off this couch, I'll be unstoppable."
— Roseanne
Advertisement:

A popular sitcom that ran from 1988 to 1997 and in 2018 on ABC, focusing on the trials of the working-class Conner family of Lanford, Illinois. It was beloved for its realistic portrayal of the average American family.

There was mother Roseanne (Roseanne Barr); father Dan (John Goodman in the role that made him famous); preppy daughter Becky (originally played by Lecy Goranson, and taken over — repeatedly — by Sarah Chalke, in one of the most famous instances of The Other Darrin outside of Darrin himself); sarcastic daughter Darlene (Sara Gilbert); son D.J. (Michael Fishman); and Roseanne's younger sister Jackie (Laurie Metcalf).

Probably the Trope Codifier for the Dysfunctional Family on American TV, sharing the title with Married... with Children. The Conners were generally stable but were still prone to dealing with domestic arguments, problematic neighbors, daughters who seemed to like bad boys and taking in a kid whose home life was far worse than theirs. The Healey brothers, Mark (Glenn Quinn) and David (Johnny Galecki) were added to the show as long-time boyfriends to Becky and Darlene, eventually marrying them. The show was also noted for a welcome subversion to the Ugly Guy, Hot Wife rule.

Famously—or perhaps infamously—the final season of the show's original run dramatically changed things by seeing the Conners escape their slave-wage working class existence when they won the lottery. Unfortunately, shaking up the status quo let out all the air in the balloon, so to speak; viewers preferred things the way they were because the family's struggle to make ends meet was part of the formula that made the show a success. Ratings tanked and brought about the show's cancellation and a hasty attempt to wrap up the series. This controversy resulted in an even more bizarre conclusion when writers tried to Hand Wave the entire last season, only to throw in a bunch of surprise turns of events no one had really asked for, as it was almost like someone took a sledgehammer to a lot of plots that had been central to the series throughout its run.

In 2017 it was announced that most of the cast was reuniting for a revival, consisting of an eight-episode season that later increased to nine, and then ten. It premiered on ABC on March 27, 2018. The premiere's ratings were so highnote it got more viewers than the original series finale over two decades earlier — which is remarkable considering the exodus of viewers from network television in the interim that it was renewed for a second (or eleventh — the show is being promoted as a continuation of the original series rather than a revival) season two days later. However, the revival was cancelled on May 29th, 2018, after Barr herself made racist tweets comparing Valerie Jarrett, a black Obama Administration official, to an ape, on top of pushing conspiracy theories and dog-whistle remarks well before that.

Eventually though, ABC announced their intention to build an aftershow spinoff without Roseanne, titled The Conners. It was greenlit on June 21, 2018, and premiered on October 16 of that year. Roseanne's absence was accounted for by having her killed off-screen.