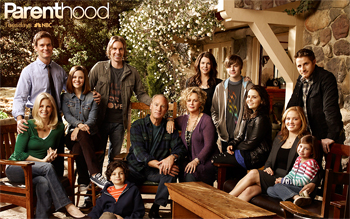 Parenthood is the second television adaptation of the 1989 movie of the same name, and like the first series (which lasted just 12 episodes in 1990), Ron Howard (who directed the film) is an executive producer, although Jason Katims, executive producer of Friday Night Lights, appears to be the main showrunner, and aired on NBC for six seasons, ending its run in January 2015.

The show explores the lives of the various families belonging to the Braverman clan.

Not to be confused with The Parent 'Hood.

This TV Series provides examples of: