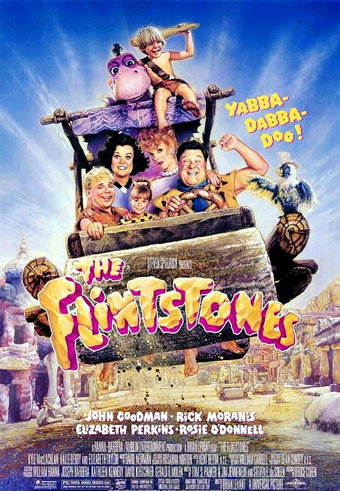 The Film of the Series of The Flintstones directed by Brian Levant, produced by Amblin Entertainment and Hanna-Barbera, and distributed by Universal. It was the first Live-Action Adaptation of a Hanna-Barbera cartoon.

Fred Flintstone (John Goodman) gives some money from his and Wilma's (Elizabeth Perkins) bank account to Barney Rubble (Rick Moranis) so that he and Betty (Rosie O'Donnell) can adopt a child. After the Rubbles adopt a cave boy named Bamm-Bamm, Barney resolves to pay Fred back someday. Later, Cliff Vandercave (Kyle MacLachlan), an executive vice-president at the Slate & Co. quarry, has the workers take an exam, offering vice-presidency to whoever gets the highest score. When Barney sees that Fred got the lowest score on the exam, he trades scores with him as payback, and Fred ends up becoming a vice-president because Barney's was the highest score. Unfortunately, Fred's first duty as vice-president is to fire Barney because he (or rather, Fred) got the lowest score. With Barney unable to get a new steady job, the Rubbles have to move in with the Flintstones, causing tension to mount between the families. As if that isn't enough, Cliff plans to embezzle the company out of billions of dollars and frame Fred for it...

The film was released on May 27, 1994. A prequel titled The Flintstones in Viva Rock Vegas was released six years later. As adaptations go, this is probably one of the most faithful to source material you can find. Of course, it also helped that series creators William Hanna and Joseph Barbera were supervising the whole project as executive producers.