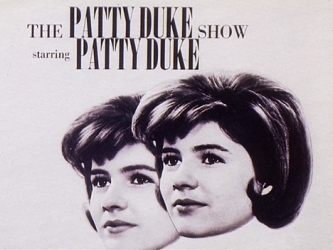 The Patty Duke Show was an 1963–66 Dom Com on ABC, starring Patty Duke as identical-looking cousins Patricia "Patty" Lane and Catherine "Cathy" Lane—one American and one Scottish—both of whom live with Patty's family in Brooklyn Heights, New York.

Possibly set the record for length of time between Cancellation and Reunion Show (1999's The Patty Duke Show: Still Rockin' in Brooklyn Heights).

The show reached a new generation in the late '80s when it was rerun on Nick @ Nite, and also ran on the daytime Nickelodeon schedule for a short time. It's currently being rerun on Antenna TV.