Shoo Out the Clowns 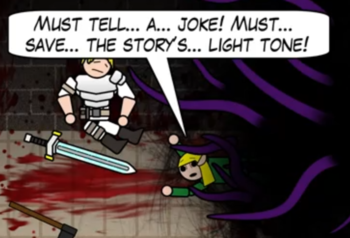 "No one else gonna say it? Fine! I fucking will! I wish Alucard was here! Yeah!...Yes really, because when he was around shit wasn't so scary! If anything it was fuckin' hilarious! But ever since he left everything's so goddamn serious! Like there's something missing!"
— Hellsing Ultimate Abridged
Advertisement:

Some stories manage a nice balance of silly and serious. But one of the most foreboding aspects of any series about to go a dramatic route for a Story Arc is the sudden ignoring of the 'sillier elements', Comic Relief and other humorous elements of a show — which, if done too obviously, can come across as rather awkward and forced. Sometimes the funnier characters are sent off, leave of their own accord, or are even killed... Occasionally the biggest insult occurs: The writers simply stop talking about the comical characters and focus on the dramatically relevant ones.

From an objective writer's standpoint this can seem logical, if you're the type of writer who feels squicky about needlessly endangering characters. In any case, it can be a big affront to fans of comedies in general. Part of a TV show's attempt to follow the First Law of Tragicomedies. Compare Cerebus Syndrome, This Is Something He's Got to Do Himself. Contrast Beware the Silly Ones. Usage of this may lead to the show Jumping the Shark if the comedic element was more enjoyable, or Growing the Beard if the comedy was unfunny in the first place. If the characters in question are scrubbed out with no hope of return, it's Kill the Cutie you want. If the henchmen or hero's friends are funny and they both run off, this shades into Screw This, I'm Outta Here!. Contrast the Knight of Cerebus, whose arrival is foreboding.