Theatre / The Hunchback of Notre Dame 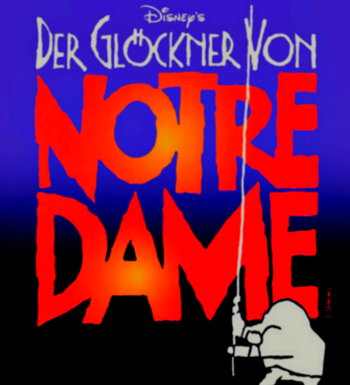 The Hunchback of Notre Dame (2014) and Der Glöckner von Notre Dame (1999) are stage musicals based on the Disney animated film adaptation of the 1831 novel The Hunchback of Notre Dame (by Victor Hugo. The 1999 German-language production featured a book by James Lapine, and the 2014 English-language production, which debuted at San Diego's La Jolla Playhouse, featured book by Peter Parnell. A cast recording has been made, but plans for a Broadway transfer were cancelled. Both musicals backtracked from Disney's take towards the original novel, and are thus Darker and Edgier, Parnell's version more so than Lapine's.

Not to be confused with Notre-Dame de Paris, the French and Québécois musical created in 1998, which is more directly based on the original novel.

In addition to the tropes of the novel and Disney film, these stage productions contain examples of the following tropes: