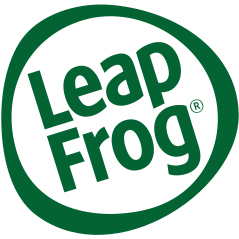 Learn something new every day.
LeapFrog Enterprises is a toy and publishing company based in Emeryville, California, founded by former Cooley LLP attorney Michael Wood in 1995 after coming up with a way to aid in his son's reading lessons. The company specializes in educational toys and electronics. They are primarily known for the LeapPad, an electronic talking book device, the Leapster - a handheld gaming console with the processing power that's about equivalent to a Game Boy Advance, and the Fly Pentop computer, which somehow gained popularity in the business and computing world (the creator of the Fly left LeapFrog and created the Livescribe enhanced pens in 2009).
Advertisement:

They are also well known for the LeapFrog Learning Friends, characters originally created for materials to be used with the LeapPad, but has since been spun-off to be used in various other toys and even animated DVD releases.

In February 2016, they revealed that they were nearing bankruptcy due to less than stellar sales, as kids moved away from physical learning toys to learning software on tablet devices, as well as inability to compete with their own LeapPad and Epic tablet devicesnote A number of factors came into play despite the Epic receiving critical acclaim from parenting groups - applications sold on LeapFrog's in-house app store sell for way more than on Google Play and elsewhere as well as the requirement to buy gift cards to get credit to buy the apps if you don't live in the main 6 countries Leapfrog has a presence in, draconian region locking/restrictions keeping parents overseas from accessing certain services, apps or videos, and a watered-down hardware combined with lack of proper Bluetooth HID peripheral support contributed to the Epic's tepid reception in some circles. Also, it forces apps to run in the UK locale for those living in the "other" region, including forcing the UK keyboard- when the most recognizable keyboard in the world is the US one, and forcing locale-aware apps to display UK English spelling and play UK audio, without giving the user a chance to customize said settings. They were purchased by rival toy manufacturer VTech shortly after.