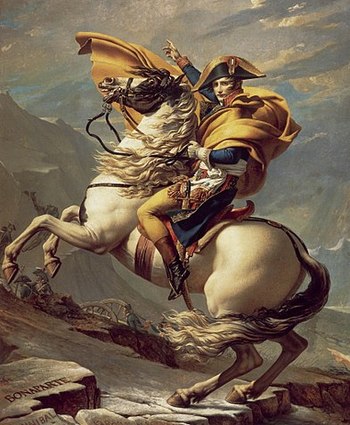 So first let past the horses black and then let past the brown.
Quickly run to the white steed and pull the rider down,
For I'll ride on the white steed, the nearest to the town,
For I was an earthly knight, they give me that renown.
— Fairport Convention, "Tam Lin"
Advertisement:

Back in the days before any kind of engines existed, horses provided man's primary method of transportation. This is reflected in Hollywood portrayals of period pieces such as Medieval European Fantasies or works that take place in The Wild West.

Given the importance of cavalry in the history of some of the world's greatest empires, horses were often a sign of status; poor people could not afford a horse. Moreover, the color of the steed's hair coat serves to emphasize one character who is in a higher standing than the rest: the White Stallion is a type of Cool Horse which serves as a ride for a character usually in a position of leadership or seniority. Chances are if the work has a large group of characters who routinely ride horseback, only one of them will be riding a white horse, usually The Leader, the Knight in Shining Armor, and royalty. Sometimes it has similar implications as white-haired people.

This is Older Than Feudalism, going back to The Bible. Several Eurasian religions and mythologies have associated white horses with the sun, fertility, divinity, and other such themes, so they are often the symbol of an All-Loving Hero or The Chosen One. Light Is Good and all that. The rider might be exhibiting Horseback Heroism.

This trope is justified in that true white horses are fairly rare, and as such, they're more expensive. (That said, a true "white horse" is one with pink skin; most of the "white" horses one sees in fiction, being "white with dark points," are technically "white-haired grays".) Adding to the rarity, white horses are sometimes born with a fatal birth defect called Lethal White Syndrome that affects the digestive tract. White foals must always be closely watched because of this.