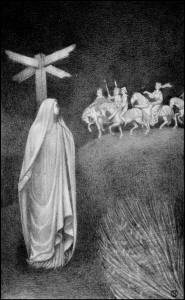 Burd Janet waits for the Fairy Ride (Vernon Hill, 1912)
"If my love were an earthly knight,
As he's an elfin grey,
I wad na gie my ain true-love
For nae lord that ye hae."
Advertisement:

"Tam Lin" is Child Ballad #39, stemming from Oral Tradition, and one of the most popular ballads, both as a song and as a source for literature. It is from southern Scotland; the oldest known version was printed in 1549.

In a nutshell: Headstrong young Janet hears that the mysterious Tam Lin has forbidden all maidens to go to the wood called Carterhaugh (a real place; it's near Selkirk), on pain of... how shall we put this... no longer being maidens. She declares that she will go to Carterhaugh, but she has no sooner picked a rosenote in ballads and stories, picking a rose summons the ruler of the place. See also "Beauty and the Beast". than Tam Lin himself shows up...note in the earlier and common versions it's consensual, but in some later versions it's portrayed as though he rapes her, and in some versions, the deed isn't mentioned at all, just the resulting pregnancy.

Sometime later, a knight at Janet's father's court remarks that Janet looks knocked upnote alternatively, it's Janet's father who notices. Janet agrees but says the baby's father is not any of the men at her father's court. She returns to Carterhaugh and speaks to Tam Lin.

Tam Lin tells Janet that he was once mortal, but was captured by the Queen of the Fairies. The fairy folk must make a sacrifice to Hell every seven years, and Tam Lin fears that he's going to be offered.note There's an oblique reference to this in Sandman. Janet can save him, he explains, if she waits by Miles Cross until midnight on Halloween. That's when the fairy folk will ride by, and Tam Lin will be on a white horse. She must pull him down off his horse and hold on to him throughout his transformations. Janet does this, and the Queen of the Fairies is obliged to let Tam Lin go. Tam Lin and Janet get married.

Joseph Jacobs rewrote the ballad into a prose fairy tale, "Tamlane", published in his 1894 More English Fairy Tales. In "Tamlane", Burd Janet and Tamlane are lovers and engaged to begin with, but Tamlane disappears mysteriously (i.e. is kidnapped by the elves) before the wedding (thus getting rid of the whole knocking-up business).

The numerous variants collected by Francis Child can be found here

The song or songs inspired by it have been recorded by numerous artists, including Fairport Convention, Steeleye Span, Current 93, and The Decemberists (the latter a loose adaptation of it as The Hazards of Love with a Downer Ending).

Tropes featured in the ballad:

Works derived from this ballad: