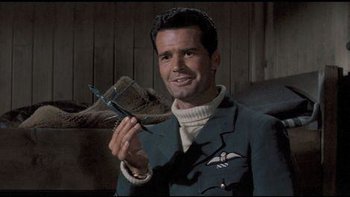 "Is this what you need?"note Note that this is happening inside a P.O.W. Camp
"He'd come up with a baby elephant if the men needed it."
— The Great Escape trailer voiceover

This is the character who magically comes up with supplies whenever The Captain or Caper Crew needs them. He has similarities to the Intrepid Merchant, and indeed may be one of his crew. However he tends to be seen in military shows, especially military comedy where there's no need to question how he comes up with the goods. May be officially described as responsible for "field acquisitions".

The Scrounger is seldom The Captain himself, but a crucial member of the squad. Just don't ask where he finds this stuff.

May overlap with the Military Moonshiner, or deal with him to get the parts needed for the still.

May overlap with Knowledge Broker if they also do this with information; both of these are favoured professions for The Rat. Can be the answer to the question, "Where Does He Get All Those Wonderful Toys?" If he makes you pay for it, he's your Friend in the Black Market, and if the goods aren't up to scratch then he's a Honest John.