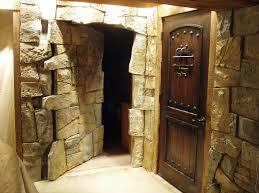 "We will take you on safe paths, through the mist. Come Hobbits come! We move quickly. I found it, I did. A way through the marshes. Orcs don't use it. Orcs don't know it. They go round for miles and miles."
— Gollum, The Lord of the Rings: The Two Towers
Advertisement:

Suppose there's somewhere you need to go, but getting there could be difficult or dangerous. Maybe you have to get into a walled city, castle, or Supervillain Lair, but the entrance is guarded by armed soldiers, monsters or worse. Maybe you have to cross a minefield or an uncharted deadly swamp where one wrong step could drop you into a pit from which you would never return. Maybe you've gotten into the enemy base and need to go to the control room, but you suspect that the main hallway with signs saying "control room this way" has more security cameras than all the other hallways combined. Maybe there's a range of mountains you need to cross, but your map doesn't show any pass nearby. Maybe you just need to go from one town to another, but you're a widely recognizable fugitive and don't want to be seen by other travelers on the road between them. Whatever the reason, there's somewhere you have to go, and obvious ways to get there either don't exist, would take too long, or would be near-suicide to use. If only there were some special route that's not widely known, one that could get you where you need to go while bypassing many of the obstacles in the way...

What you need is a Secret Path. This is a passageway that not everyone knows about that can be used to get somewhere that is difficult to reach or to go somewhere without being noticed. Sometimes a local guide will be knowledgeable about paths that outsiders are unfamiliar with.

Although these secret passages are sometimes lauded as "shortcuts," they can sometimes take longer than more obvious paths, and can be laden with treacherous hazards that make them even more dangerous than the danger they allow travelers to avoid. Expect any secret path through a swamp to be unpleasant, since Swamps Are Evil.

Common types of secret paths include back doors, Bookcase Passages, ventilation shafts, and underground routes such as passages through Absurdly Spacious Sewers or Tunnel Networks. See also Right Under Their Noses and Hidden in Plain Sight. If you make your own secret path, it's called Dungeon Bypass. Compare Secret Room for a similar concept just with a hidden room instead of a passageway.