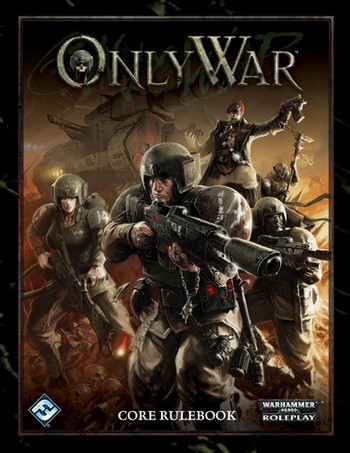 ''Men, we are the first, last and often only line of defence the Imperium has against what is out there. You and that fine piece of Imperial weaponry you hold in your hands is all that is keeping humanity alive. Most of you will probably not live to see your second year in the Guard and most of you will probably never see your homeworlds again, but I can guarantee you that when you do fall, with a prayer to the most high and mighty God-Emperor on your lips, you will have earned the right to call yourself a man!”
— Staff Sergeant Vermak, 12th Cadian Shock Regiment
Advertisement:

Only War is the fifth gameline to use the Warhammer 40,000 Roleplay system, this time focusing on the common soldiers of the Imperial Guard. Players get put into the shoes of your average Imperial soldier, thrown into the endless meat-grinder of war and slaughter that defines the 41st millennium, with only your lasguns, flak-armor and faith in the Emperor to protect you and your squad. The Imperial Guard are the common soldiers of the Imperium, the brunt of the Imperial forces, and the first to be sent to die in any conflict.

Needless to say, this RPG offers — perhaps more than any other RPG in the line — the ability to become truly Badass Normal; because your characters aren't rich and/or influential like in Rogue Trader, superhuman Space Marines like in Deathwatch, 'blessed' by Chaos like in Black Crusade, or have the backing of the Inquisition like in Dark Heresy. Only War is also unique in that it is the only Warhammer 40,000 RPG that focuses primarily on the part that made the franchise popular in the first place — the warfare.

The game was released December 17, 2012. Now (as of 2017) out of print, with Fantasy Flight Games and Games Workshop ending their partnership (and thus FFG losing the Warhammer licensing).