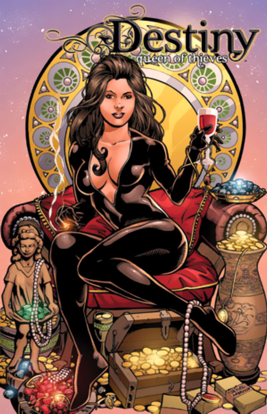 It's good to be the queen!
"Worthy to rank with your own Robin Hood, signorina. Montano, the King of Thieves, was first heard of in the mountains some ten years ago, when people said brigands were extinct. But his wild authority spread with the swiftness of a silent revolution."
— Muscari, Father Brown: "The Paradise of Thieves" (1912)
Advertisement:

Exactly What It Says on the Tin; someone (not always male) who is identified or referred to as the top criminal. Be they Desert Bandits, Pirates on the high seas, Outlaws on the frontier, etc.

Of course, the idea of criminals forming a monarchical government doesn't really make very much sense. Yet the trope still persists and shows no signs of becoming discredited. This is probably a result of the Rule of Cool.

The King of Thieves doesn't have to be a part of true monarchy or kingship. They might have reached their position through Klingon Promotion as a result of their hard work and/or ruthlessness. Or it might just be a title they get for being the strongest around. They may actually command the loyalty of either all of the pirates on the seas, or another type of Thieves' Guild, or they may simply be the captain of a single notorious pirate ship or some other small group of outlaws who prefers an impressive-sounding title.

Can overlap with Elective Monarchy. Compare Klingon Promotion, Asskicking Equals Authority. See also The Don for modern urban gangsters, Supernatural Elite for the fantastic equivalent, and Just Like Robin Hood who is sometimes known as the Prince of (or among) Thieves.