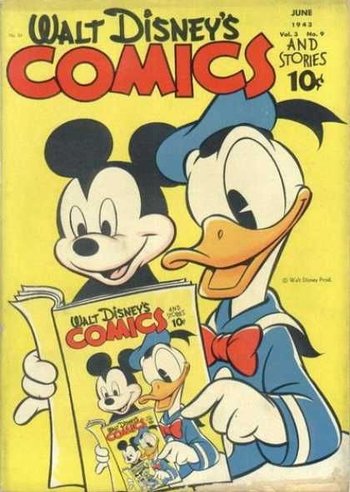 The heroes of their universes reading about themselves.
Advertisement:

When Walt Disney gave his cartoon star Mickey Mouse a spotlight in the animation world, the character's popularity rose and new opportunities arose for his company. Besides merchandising and endorsement, in 1930 Mickey was offered his own newspaper comic strip. That was the start of Disney's comic business, and over 80 years later, it's still around and publishing.

At first it started with just Mickey, but then other Disney characters and features began to have their own comic adaptations. When Donald Duck's popularity began to peak, he was inevitably given his own comic to star in. All sorts of Disney characters began to appear in the comics, and before long, two main comic continuities were defined.

Fans commonly refer to these two universes as the Mouse and Duck universes. Together, they form a neat Modular Franchise that has stood to this day.

The Mouse universe started out with the adventures of Mickey Mouse, hence the name. Over time, his friends and supporting characters came to star in comics of their own, but ultimately they're still a part of the Mouse universe. Besides Mickey, Goofy also has his own adventures in this universe, and the Mouse universe is home to famous villains like Peg-leg Pete and the Phantom Blot.

The Duck universe began with Donald Duck as the star. He has been partially eclipsed by Scrooge McDuck, but he has not completely lost his former status.

Overall, people tend to agree that the Duck universe is more popular than the Mouse universe. But since the comics are produced internationally — more than in the United States, in fact — whether Mickey or Donald is more popular depends on where you look. In Italy, for example, Mickey and Donald are equally wildly popular as Topolino and Paperino, or "little mouse" and "little duck" respectively; while in the Nordic countries, Donald Duck and Uncle Scrooge reign supreme. However, both comic universes are thriving in the modern day, so fans of both the Mouse and Duck comics have reason to be happy.

The Duck and Mouse universes are set in Duckburg and Mouseton, respectively. It's often been depicted that the two towns are not far from each other on the map, and both exist in a fictional U.S. state named Calisota.

For the Mouse universe, see Mickey Mouse Comic Universe; for the Ducks, see Disney Ducks Comic Universe. This page is about the Modular Franchise the two form. Examples specific to Mice or Ducks should go on their respective pages, but if a work concerns both universes or its characters, it can go here.

Now has a character page, for those characters who are part of the franchise and sometimes appear in crossovers, but don't primarily belong to either Mouse or Duck universe, such as Chip 'n Dale, Br'er Rabbit and The Three Little Pigs.

Noteworthy stories that use the Mice and Ducks Verse:

The Mouse and Duck comics show examples of: