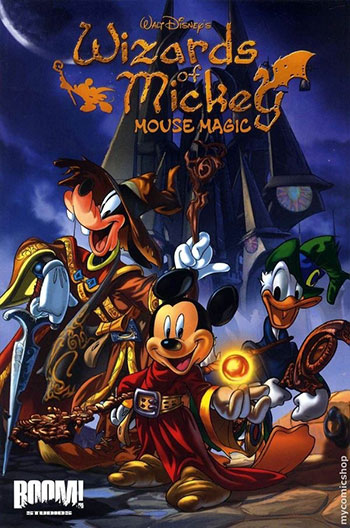 An Italian-based Disney Modular Franchise based around the characters of the Mickey Mouse Comic Universe and Disney Ducks Comic Universe. Besides the comic that started it, it also spawned trading card and mobile phone games.

The story begins with Mickey Mouse, The Apprentice to the local village mage Nereus, setting out on a quest to reclaim his village's Rain Diamagic, one of many magical crystals scattered across the world, from the clutches of Peg Leg Pete, leader of Team Black Phantom (consisting of himself and the Beagle Boys). Making things worse, Pete's master, the Phantom Blot has kidnapped Nereus and is searching the world for ways to increase his dark power.

When finally catching up with Pete, Mickey finds that Team Black Phantom has entered the Great Wizard Tournament, a spectacular series of magical duels and contests for wizards where the goal is not merely to see who the best wizard team is, but also to collect and gather all the Diamagics to recreate the Great Crown, a powerful magical artefact whose owner will become the Supreme Sorcerer of Dolmen and gain great powers. Though Mickey at first is only after his own Diamagic and isn't interested in the Crown, he nevertheless finds himself having to gather a team of wizards of his own and enter the Tournament for the chance to confront Pete and regain the Diamagic.

Luckily, he encounters and befriends Donald Duck (here an Inept Mage whose magic always has a bizarre and/or delayed effect) and Goofy (a herbalist/alchemist who only uses magic when it's absolutely necessary and is constantly trying out new careers), and the three agree to form a team to enter the Tournament. Calling themselves "the Wizards of Mickey," they end up rising up the ranks and collecting the Diamagics, while foiling the plots of Team Black Phantom and preparing to finally confront the Phantom Blot and free Master Nereus.

In 2009, when Boom! Studios acquired the rights to the Disney comics, they brought Wizards of Mickey to the United States to much praise and acclaim, though only translated the first arc. Years later, in 2020, JY would begin releasing their own translation of the full series in America.