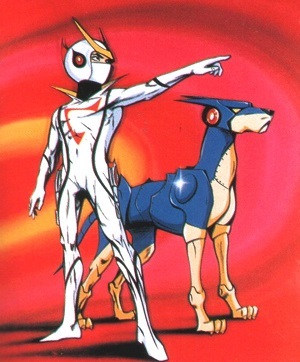 Before Mega Man, there was... Neo-Human Casshern!
"Throwing his irreplacable life away, reborn in an immortal body, to strike and crush the devils of iron. If Casshern doesn't do it, who will?"
— Opening Narration
Advertisement:

Dr. Kotaro Azuma was creating androids when his prototype, BK-1, went out of control, escaped, and created a robot army which he led to conquer the Earth. The doctor's son, Tetsuya, rebuilt himself as "Casshern", an incredibly strong and agile robot who devotes his new existence to hunting down and destroying the Andro Army of BK-1, now styling himself the "Braikingnote based on a Japanese word meaning "rogue" or "brute"; frequently mistranslated as "Black King" Boss". Casshern was distinguished by not usually using weapons in his fights; he literally tore the Braiking Boss' Mecha-Mooks apart with his bare hands. His companions are Friender, a robotic dog able to transform itself into various vehicles, and Luna Kozuki, a plucky young woman whose scientist father gave her an anti-robot pistol.

Casshern has been Retooled several times since the original:

Casshern was also one of the characters to appear in the fighting game Tatsunoko vs. Capcom.

Along with Science Ninja Team Gatchaman, the show will receive an american DVD release by Sentai Filmworks.