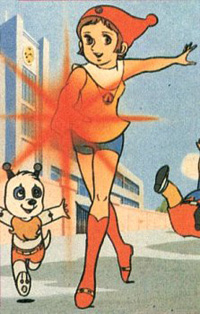 Miracle Shojo Limit-chan is an early Magical Girl anime, also known as Cybernella in Italy. It aired from October 1973 to March 1974 on NET (now TV Asahi).

When 11-year-old Satomi Nishiyama is mortally injured in an airplane crash (which also kills her mother), her scientist father saves her life by turning her into a cyborg. Now Satomi, now nicknamed Limit, has a number of superpowers at her disposal, but she must also keep her robotic nature a secret from her peers.

Limit-chan was created by Toei Animation from an original idea by Hiromi Productions. She got the time slot on NET that had been reserved for Magical Girl series since Sally the Witch (but had been temporarily lost to Babel II), while another Magical Girl cyborg - the same animation studio/broadcaster's Cutey Honey - was retooled as a more action-oriented series and got a different time slot. It was Honey, however, who proved more popular while Limit fell into obscurity (except in Italy, where she became quite popular under the name "Cybernella"). Toei re-teamed with Hiromi Productions afterward for Majokko Meg-chan.

This show is noteworthy also for being one of the earliest productions to be outsourced by Toei to South Korean studios.