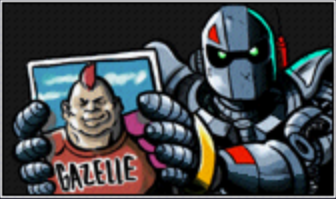 "He lost over 99% of his body fat in less than a week using this one simple procedure!"
Sith Inquisitor: What do you think? Can you eat [Darth Skotia]?
Khem Val: It is more machine than man, I think. Bad for the digestion.
Darth Skotia: Ha! Fools.
— Star Wars: The Old Republic
Advertisement:

Most fictional cyborgs are still visibly human. They might have Artificial Limbs, or an Electronic Eye or two, but they obviously started as a fully organic person, and the organic parts predominate. The Full-Conversion Cyborg is not like that. The Full-Conversion cyborg has had pretty much their whole body replaced with technology, and usually appear like a robot at first glance. Sometimes, only their brain remains; in other cases, a limited core of organic systems is kept to keep the brain supplied with blood and nutrients.

In appearance, these cyborgs can vary from metallic versions of their previous selves, appearing as a Ridiculously Human Robot at first glance, to being so heavily modified, upgraded, and loaded with additional limbs, systems, and add-ons to barely even be humanoid anymore.

People's reasons for becoming beings of this sort vary. A common origin has them suffer from horrific accidents that left the majority of their bodies unsalvageable, requiring the placement of their surviving parts in an artificial shell. Others take a more Transhumanist route, replacing and upgrading more and more of their original bodies in an attempt to become more effective at their chosen vocations or to achieve a higher state of consciousness. Others still are the result of Unwilling Roboticization, often intended to turn them into living weapons. The Full-Conversion Cyborg tends to have a high chance of showing up in Cybernetics Eat Your Soul or What Measure Is a Non-Human? plots, given that, going solely by proportions, they're closer to robots than people.

Compare Brain in a Jar, which one of these would be without their body; Man in the Machine, who is reliant on cybernetic parts but has more of their body remaining; and Brain Uploading, when a character sheds their organic body entirely. Contrast Artificial Human, Meat-Sack Robot, Wetware Body, and Wetware CPU for situations where a machine intelligence takes on more organic materials.