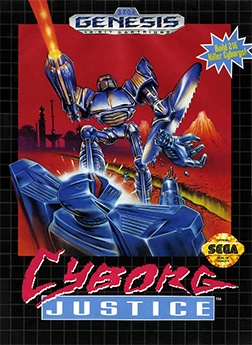 A Beat 'em Up made by Novotrade/Appaloosa in 1993 for the Sega Genesis.

During a routine patrol, a spaceship is caught in a meteor storm and crash lands on a nearby planet. The pilot dies, and his brain is harvested by the evil Cydrek Federation to create a cyborg to build a massive fleet to take over the galaxy. They plan to wipe the pilot's memory, but for unknown reasons the mind wipe fails. Cue the Roaring Rampage of Revenge as the rebellious cyborg storms Cydrek's complex to stop their evil plot.

The distinctive feature of this game is character customization. Instead of having a few pre-set characters as in most brawlers, the cyborg is created by mix and matching several arm, body and leg types, all with their own abilities. And during gameplay, it's possible and even encouraged to rip off and appropriate your opponent's arm and legs.