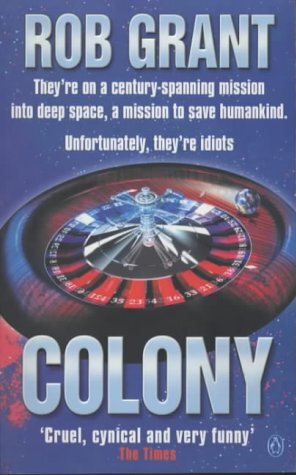 The Earth is dying. Global warming is coming to its logical conclusion. Various parts of the world are submerged. Overpopulation is stretching the remaining resources to breaking point. A few small outposts have been set up within the solar system, but they are harsh and brutal. Mankind needs a more permanent solution.

A massive Generation Ship named the Willflower is built with the largest budget in the history of humanity. It will be crewed by the creme de la creme of humanity. Every crew member from the captain right down to the canteen staff is the absolute best at what they do. Their mission is to find a new home for mankind (or at least for the best mankind has to offer anyway).

Enter Eddie O'Hare. He considers himself to be the unluckiest man in the cosmos. He's been framed for taking money from some very important people. There are hitmen after him. He's down to his last couple of bucks but his luck changes when he meets Charles Perry Gordon, a man who looks exactly like him who wants out of The Project due to having just won an immense fortune.

However, this doesn't turn out to be the dream escape Eddie's dreamed of. His new identity is that of Chief Community Planner, which is fairly high up the ladder and will require a lot of jumping through hoops. So, it's a bit of a relief when Eddie is killed.

So, a story about the last remnant of humanity in deep space sounds familiar, right? That's because it was written by Red Dwarf co-creator Rob Grant. While its similarity to Red Dwarf was criticised, its Darker and Edgier and genuinely funny storyline meant it was well received when it came out.