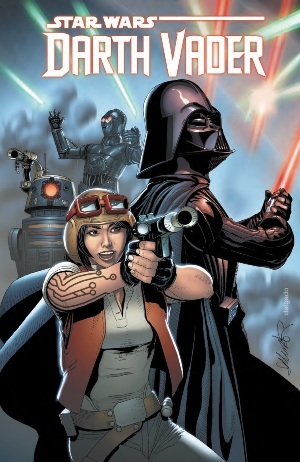 Following the destruction of the Death Star and the Battle of Cymoon 1, the Emperor begins to lose patience with Vader's repeated failures to contain the rebel threat. Vader, of course, sets out to prove his worth and quell the insurrection, while at the same time carrying out his own secret agenda.

Notably, one of the series' main draws is that it gives Vader a secret inner circle of personal minions who do his bidding outside official Imperial channels, acting as a kind of dark counterpoint to Luke Skywalker's famous band of companions. One of those minions, the space thief Chelli Lona Aphra, became something of a Breakout Character, going on to appear in her own comic book and audio drama. Another, the Wookiee bounty hunter Black Krrsantan, went on to appear in the Disney+ series The Book of Boba Fett, making him the rare example of a Star Wars character to make the transition from comic books to live-action.

After the series concluded in late 2016, it was succeeded by Darth Vader: Dark Lord of the Sith in 2017, exploring Darth Vader after the events of Order 66 and the rise of the Empire in Revenge of the Sith, and by Doctor Aphra, continuing the adventures of Doctor Aphra. A third series, Darth Vader (2020), continued to follow Darth Vader in the aftermath of The Empire Strikes Back.

See here for Dark Horse Comics series that is set in the original expanded universe.