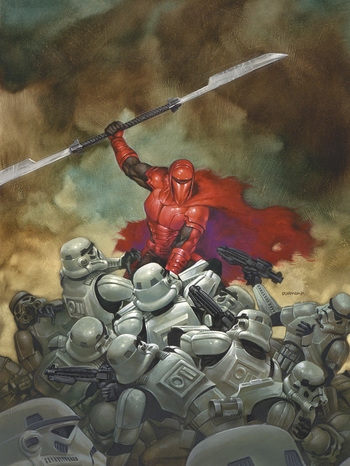 You didn't think Jedi were the only One Man Armys in the galaxy, did you?
"The elite soldiers of Emperor Palpatine's Royal Guard were among the most feared in the galaxy – so feared that after the Emperor's death, those who assumed power ordered the murder of all of them. But one, Kir Kanos, survived..."
Advertisement:

Following the events of Dark Empire, Palpatine's Imperial guards have all been assassinated under the orders of one of their own, Carnor Jax, who has positioned himself to become the new leader of the Imperial Remnant forces. But all is not well for the new Emperor ascendant, as he knows that one of his former brothers-in-arms still lives: his long-time rival, Kir Kanos. While Jax dedicates all of his time and forces to hunting down the one man who can bring his rule crumbling down, Kanos allies himself with a band of Rebels as he begins a one-man war against the Empire — in the name of the former Emperor who he still swears allegiance to.

Crimson Empire was a series of Star Wars Legends comic books written by Mike Richardson and Randy Stradley. They were originally released by Dark Horse Comics in 1997 and 1998 as a six-issue monthly series, which was later compiled and sold as a trade paperback. Its first sequel, Crimson Empire II: Council of Blood, was released later in 1998 and 1999.

It is primarily acclaimed for the 12-page final duel between Kir Kanos and Carnor Jax. In late 2008, it was claimed that work on Crimson Empire III, the second sequel to Crimson Empire, would begin; Stradley later debunked this claim. At Celebration V it was announced that Crimson Empire III would be released in 2011. It was finally finished in September 2012.