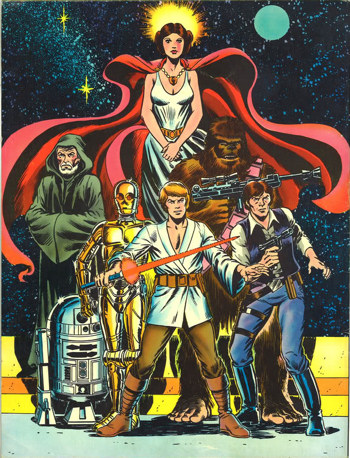 "If it's a comic book, someone has to wear a cape, right?"
A long time ago, in a comic book market far, far away, Marvel Comics released an official comic-book adaptation of the movie Star Wars Episode IV: A New Hope (then simply called Star Wars) in 1977. Like the movie, this adaptation was a success, and so Marvel continued publishing the comic beyond the end of the original story.
Advertisement:

Dark Horse Comics, the publisher of Star Wars comics until 2015, had published reprints of these stories as the Classic Star Wars series, and in trade paperback form as Star Wars: A Long Time Ago, a seven-volume series, later reprinted in 5 omnibus volumes. In addition, Dark Horse also reprinted a series of manga versions of the Original Trilogy and The Phantom Menace which retold the stories in the typical stylistic elements of the medium.

The original 1977-1986 series returned for a one-off issue 108 in May of 2019, serving as one of the few Legends stories (along with tie-in media and Star Wars: The Old Republic) to be published after the 2014 reboot.