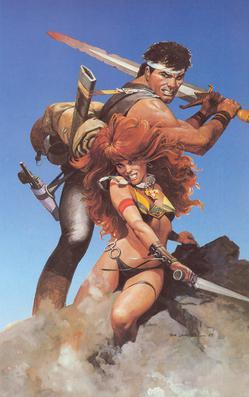 Storm is a Science Fiction comic book series primarily produced for a Dutch audience, but started off with a British artist and is also available in English. These days the artist is the Dutch Romano Molenaar.
Advertisement:

Very pulpy but at the same time often pretty high concept, it is set in the far future but most of the time it feels closer to Conan the Barbarian. It was essentially created as an excuse for the British artist Don Lawrence (also known for The Trigan Empire) to draw epic scenes. The early albums had the stories provided by a number of different authors of widely varying talent, the Dutch Martin Lodewijk (Agent 327) eventually becoming the exclusive writer.

The series started as "Commander Grek", about an astronaut of the same name thrown into a future controlled by Fish People, a plot not unlike Planet of the Apes. This album is still counted part of the series as a sort of prequel, but disatisfaction about the story led it to be retooled to be about another astronaut named Storm. Storm is an ace astronaut in the near future, selected to be the first to explore Jupiter's red spot. However, the spot turns out to be Negative Space Wedgie, and when he emerges again there is no longer any sign of his spacefaring civilisation. Returning to Earth, he discovers that aeons have passed, many civilisations have risen and fallen again, and a primitive one very alien to him is now thriving in the lowlands that were once Earth's oceans. He quickly picks up a sword and a girlfriend, Redhair (who is also known as Ember in the most recent English translations), and what follows is nine volumes of exploring and having adventures. Ultimately he is responsible for (in the space of just two stories) exposing and then defeating the aliens secretly in charge, and then rebuilding society to the point that Earth is nice and civilised again.

Realising that they had written themselves into a corner, the writers briefly mucked about with another time jump and some sentient dinosaur nonsense, and then decided on a proper retool : Storm and Redhair were transported to Pandarve, a strange world and accompanying system defying the laws of nature. Pandarve and the many other worlds in the system orbit a white hole, which spews out breathable air filling the space between the planets. Thus, once the scientific absurdity gets handwaved, you get a place where people actually travel between planets in sailships. Storm and redhair pick up a third companion, the blood red Boisterous Bruiser Nomad, and go adventuring again, often chased by Pandarve's despotic theocrat Marduk who believes that due to being a time traveler, Storm's body is key to control of the multiverse. 17 more albums were written, culminating in an epic trilogy about a Big Dumb Object intruder with some surprising inhabitants threatening the Pandarve system.

The publishing tempo started to seriously lag during the production of this trilogy, and after it ended nothing happened for two years, only for Don Lawrence to die shortly before starting work on a new story in 2003. Because his irreplaceable drawing style was the heart of the series, there were serious doubts if it could be continued, but after a long search two artists were found that complementing each other's specialties might pull it off: Romano Molenaar and Jorg De Vos. A new album finally arrived in 2007, and was generally considered to be a success. Since then, albums have again appeared at a tempo of about one per year.

The pre-Pandarve albums are known as the Chronicles of the Deep World, whereas the later ones are the Chronicles of Pandarve. There was also three poorly received albums drawn by another artist supposed to be set in an uneventfull period of Storm's deep world time, called the Chronicles of Meanwhile. More recently, the series has gotten a bit of a spinoff fever, in part because Don Lawrence's successors just coudn't draw fast enough and different teams were needed to maintain regular output. The Chronicles of the Outer Rim, which is more or less just regular stories by another team, seems to have stalled after just one album. A prequel centering on Redhair's adventures before she met Storm is also in the making.

Not to be confused with the Marvel Comics character Storm, obviously.